On June 25, 2020, at around 4:00 p.m., the Great Neck Vigilant Fire Company was alerted to a brush fire in the vicinity of Gussack Plaza and Cuttermill Road. M-LFD EMS Captain Genser saw smoke from South Middle Neck Road, and arrived first on scene. He advised Great Neck Vigilant Fire Dispatch of a brush fire which had began to extend to the building. Great Neck Vigilant upgraded to a general alarm, and a Signal 10 was transmitted by their Chief of Department, Josh Charry. M-LFD was called to the scene for Tower Ladder, with 8744. FAST 8759, Engine 8735 and Ambulance 8767. Ultimately, the fire reached 5 alarms with multiple departments from throughout Nassau County responding. Several firefighters sustained minor injuries at the scene.  M-LFD units operated under the command of Chief of Department Mazurkiewicz (8703) 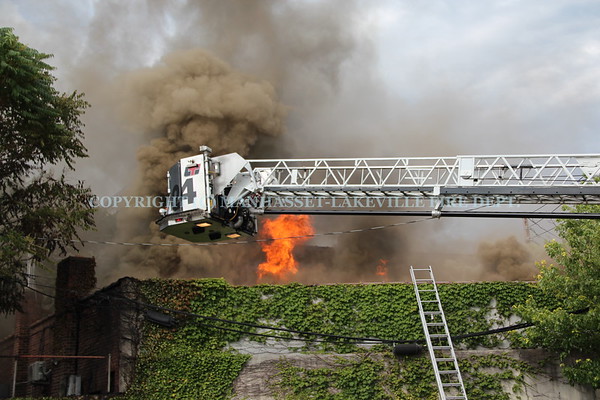