On September 8, 2019, at approximately 8:07 p.m., Manhasset-Lakeville Fire Department Companies 3 and 4 were dispatched to 36 Meadow Woods Road, in the Village of Lake Success for a reported odor of smoke in the house. All four M-LFD Deputy Chiefs responded immediately and were updated by M-LFD Dispatch that the Lake Success Police were on scene reporting a working fire on the second floor of a private residence. With this information, all 5 M-LFD fire companies and the Ambulance Unit were added to the alarm. A "Signal 10" was transmitted for a confirmed working fire upon the arrival of the Deputy Chiefs at 8:15 p.m. The crews of E8735 and E8758 stretched hoselines to extinguish the fire, and were joined by the crew of E8712. The crews of TL8720 and L8743 conducted vent, enter and search operatinos and checked to ensure that the fire had not extended into the attic area. The New Hyde Park Fire Department responded to the scene with a Firefighter Assistance and Search Team, which was then put to work to assist with firefighting operations. The Port Washington Fire Department then responded to the scene to assume their responsibilities. The fire was placed under control at 8:52 p.m., and all units were released from the scene by 10:30 p.m. There were no injuries, and the cause of the fire is under investigation by the Nassau County Fire Marshal's Office. 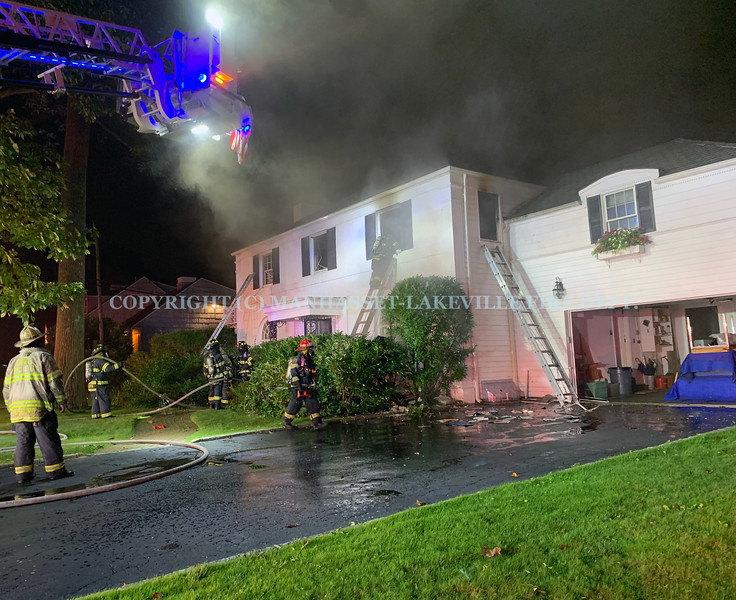