On Thursday, February 11, 2016, at 10:44 p.m., Manhasset-Lakeville Fire Department Companies 2 and 5 were dispatched to 45 Willets Pond Path in North Hills for a reported fire coming from the fire place of a home. Deputy Chiefs Kiess (8701), Pisani (8702), and Stone (8705) all responded within minutes of the alarm and were advised by M-LFD Dispatch that he was now receiving automatic alarms from the two adjoining homes and that Albertson Assistant Chief 801 was on scene reporting a heavy smoke condition in the area as well as coming from the home. Deputy Chief Kiess arrived on scene moments later and transmitted a "Signal 10" for a working fire in the basement of the house. This added Company 1, The Ambulance Unit and Rescue 8730 to the initial alarm, along with the New Hyde Park Fire Department as a FAST Team.

Engine 8758 was the first engine to arrive at the scene and stretched an 1 ¾'' hose line into the front door, while the crew of Quint 8728 began to vent and search the fire building as well as conduct searches of the adjoining homes on the exposure sides. After knocking down the fire in the living room, the crew from E8758 made an aggressive push into the basement and knocked down the main body of fire. A total of 3 hoselines were stretched, and 2 were operated to extinguish the fire, which extended to the first floor of the home and caused the floor to partially collapse.

Due to the extremely cold temperatures and heavy volume of fire, all five Manhasset-Lakeville Fire Companies as well as the Ambulance Unit operated at the scene, and the Garden City Park Fire Department was also called for an additional unit to respond to the scene.

The cause of the fire in under investigation by the Nassau County Fire Marshal's Office, and all units were released from the scene by Deputy Chief Kiess by 2 a.m 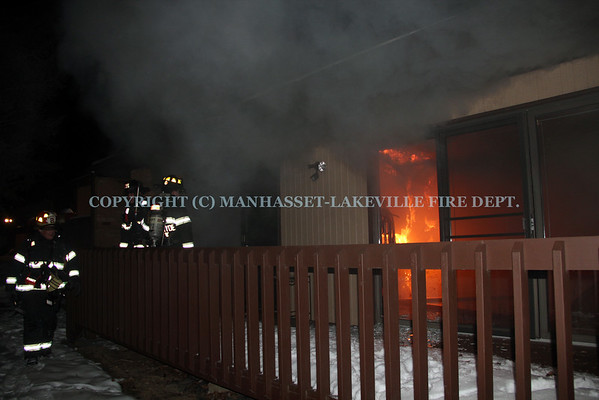