On Saturday, May 21st, 2016, at approximately 12:18 a.m., Manhasset-Lakeville Fire Department Companies 1, 2, 3 and the Ambulance Unit were dispatched to 94 Bridge Road in Manhasset for a reported structure fire.  Chief of Department Kiess (8701) was the first unit to respond and was advised by M-LFD dispatch that he was receiving multiple calls for a fire in the rear of the house at 94 Bridge Road in Manhasset.  Chief Kiess arrived at the scene at transmitted a Signal 10 for a working fire, with a heavy volume of fire visible in the rear of the residence, on the second floor.

The crew of the first due Engine, 8712, along with the crew of E8735 stretched two hose lines into the interior of the home and performed an aggressive interior firefighting attack after the crew of Q8728 located the main body of fire.  While operating inside the home, it was discovered that the fire was well advanced in the attic of the home, and had spread across the entire house.  The interior attack crews were ordered to evacuate the building after a large portion of the roof began to collapse.   Q8728 set up their master stream, and multiple hose lines were positioned around the home to begin an extensive exterior attack.  At this point M-LFD Companies 4 and 5 were requested to respond to the scene with TL8744 and E8758.  TL8744 was set up on Park Woods Rd and began using their master stream to assist with extinguishing the extremely large volume of fire. 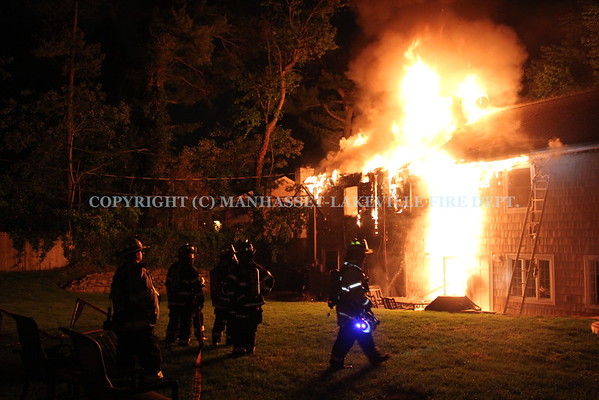 Chief of Department Kiess placed the fire under control at 2:24 a.m., and all units were released from the scene at 4:38 a.m.  In addition to the numerous M-LFD units which operated at the scene, the Port Washington Fire Department responded to the scene and stood by as a FAST Team.

The cause and origin of the fire is under investigation by the Nassau County Fire Marshall’s Office.

To view a complete gallery of photos and videos from this fire, click here.

Annual Antique Fire Apparatus Show and Muster This...
M-LFD Responds to Overturned Truck on the LIE