On Wednesday, March 9th, 2016, at approximately 7:17 p.m., M-LFD Companies 1 and 2 were dispatched for an automatic alarm in Zone 2. Deputy Chief Kiess (8701) was the first to respond and was advised that a member of the department was on scene reporting a smoke condition in the basement of the home. With this information, Deputy Chief Kiess requested Company 3 be added to the initial assignment. Upon the chief's arrival, a heavy smoke condition was found in the basement and the first floor of the home. A working fire was transmitted, and the M-LFD Ambulance Unit was requested to respond to the scene. The crew from Q8728 along with Deputy Chiefs Pisani (8702) and Gobbo (8704) were able to locate the main body of fire on the first floor of the large private home. Once the fire was located, a Signal 10 was transmitted and the Port Washington Fire Department responded to the scene with a FAST.

The crew of E8712 stretched an 1 3/4'' hose line into the home and began to extinguish the fire.  A second hose line was stretched, however it was not operated.  Due to the size of the home, and heavy smoke condition from the fire, units stayed on scene for several hours venting the smoke and high levels of carbon monoxide that were present in the home.

All units were released from the scene by 10pm. 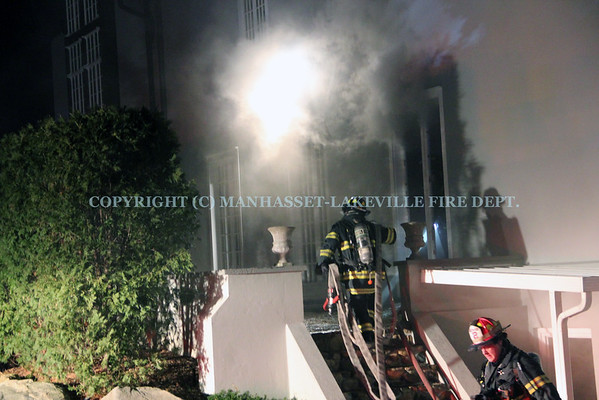