On March 7, 2018, M-LFD responded to over 30 calls as a result of the Nor'easter hitting our area. At approximately 11:06 p.m., M-LFD Companies 2 and 4 were taking up from a wires down call when they were notified by M-LFD Dispatch of a call for a possible house fire with people trapped at 860 Plandome Road in Manhasset. Q8728 was the first unit to respond and arrive on scene and encountered fire coming out of the 2nd floor window of the residence . A Signal 10 was transmitted for the working house fire , and Q8728 immediately stretched a hose line into the residence to extinguish the fire. The crew from L8743, which also responded from the previous alarm conducted a search of the home and determined all occupants were out of the home. A second precautionary hose line was stretched, but not utilized. Crews from Companies 1, 2, 3 and 4 conducted extensive overhaul of the second floor of the residence to ensure the fire had not spread to the attic. The M-LFD Ambulance Unit stood by at scene to provide rehabilitation to the firefighters as well as medical support. The Port Washington Fire Department responded to the scene and stood by as a Firefighter Assistance and Search Team (FAST) with R8522 and C8500.

All crews were released from the scene by Chief of Department Pisani (8702) by 1 a.m. The cause of the fire is under investigation by the Nassau County Fire Marshal's Office. 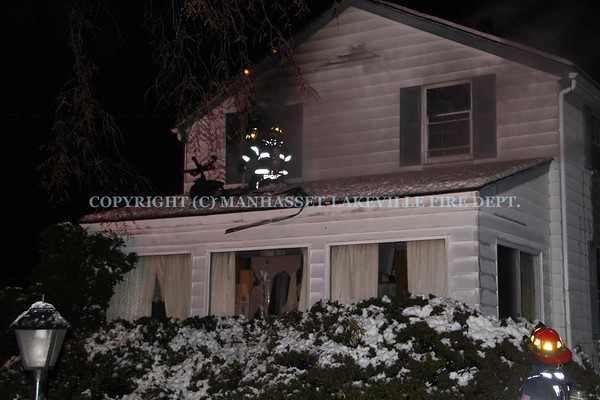