On Thursday, December 20, 2021, at approximately 9:48 p.m., all six M-LFD Companies were dispatched to a reported building fire at 15 Clent Road in Great Neck Plaza. DC8702 (Weisburd), DC8704 (Antonelli), TL8744, E8734, A8769 and FC8799 were all taking up from a mutual aid to the Great Neck Alert Fire Company for a house fire in Kings Point, and arrived on scene within minutes. Crews encountered heavy smoke showing from the building, and a 360 degree size up showed fire blowing out of 2 windows in the rear. A "Signal 10" was transmitted for a working fire and several mutual aid departments were requested to the scene. Fire crews worked to simultaneously evacuate the building, extinguish the fire and vent, enter, and search all of the apartments while EMS established triage and began treating numerous patients. A total of 3 patients were transported to an area hospital, and 9 were treated and released from the scene.  Displaced residents were transported to M-LFD Company 2 where they were met by representatives from the Red Cross.  Other departments on scene included: Great Neck Vigilant, Great Neck Alert, Port Washington, New Hyde Park and Roslyn Rescue 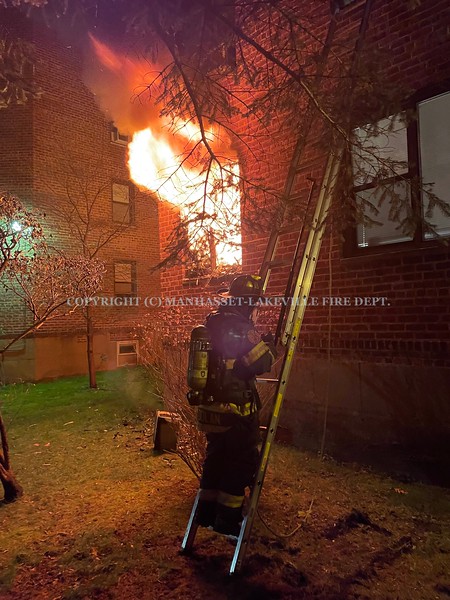